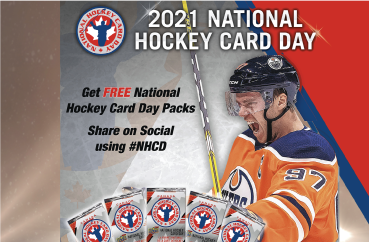 National Hockey Card Day is looking a little different this year… for one it’s in July! Instead of shaking off your snow boots, you will be hiding from the heat in the Okanagan!

We are going to have a fun day in the store! Come to the McDavid door to receive your FREE packs of cards and kids will have a chance to build their set. Check out great specials around the store and Spin the Wheel with purchase to win discounts, prizes, Upper Deck Swag and more!

We also need to continue to be aware of covid safety regulations so we won’t be able to host our Scavenger Hunt this year but don’t worry it will be back again! Over the next few months, we will continue to open up more and hope by the Fall, can host more in-store events.

We know not every town has a hobby shop to pick up a pack of cards, or perhaps you are a bit hesitant about being around lots of people – we understand that! You might have a niece/nephew/ grandkids/kids etc living in a small town and you wish they could get a free pack!

We have come up with a MAIL OPTION!

We can mail a free pack of cards wherever you live in Canada! All we need is an address & toonie to cover postage. Let’s get hockey cards in as many kid’s hands as we can! 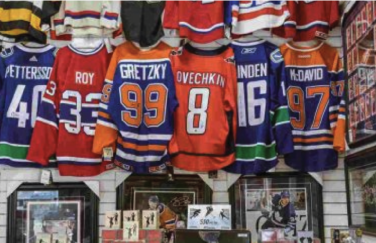 One of our main purposes here at Players Choice Sports is to put the perfect memorabilia piece and / or cards into the hands of our customers. We love hearing the stories of why a piece has been chosen so in the coming weeks stay tuned for more stories from our customers!

If you have a story to tell of a piece you’ve picked up at our store, email info@playerschoicesports.com

I had approached them about acquiring an autographed Gretzky piece for my rec room. They were able to order me a piece directly from Upper Deck and were knowledgeable about the products available and helped me pick the perfect one for me at the budget I had. It’s beautiful and I love it because the photo represents to me how Gretkzy’s career progressed and it’s high quality!

This is my favourite purchase from Players Choice Sports. Growing up in Ontario I was a huge Leaf fan. I had some early health problems that stopped my budding hockey career but always when I played, I tried to emulate Johnny Bower. Johnny was a class act and a genuine good person.

So when I saw this picture at PCS, I had to own a little piece of something that still bring me happiness every time I look at it.

Being lifelong fans of the Greatest Player of All Time, Wayne Gretzky, we have attempted to collect as much cards, pictures, memorabilia as possible.

We have been fans and Winnipeg Jet collectors for over 50 years. Meeting Bobby Hull in person at Players Choice Sports was a special day and having several items signed was a bonus. A once in a lifetime event for a Jet’s fan.

This shadow box of Teemu Selanne is special to us because it was a farewell gift from Players Choice when we left Kelowna. It hangs in a prominent place in our house and is part of our Winnipeg Jets collection. 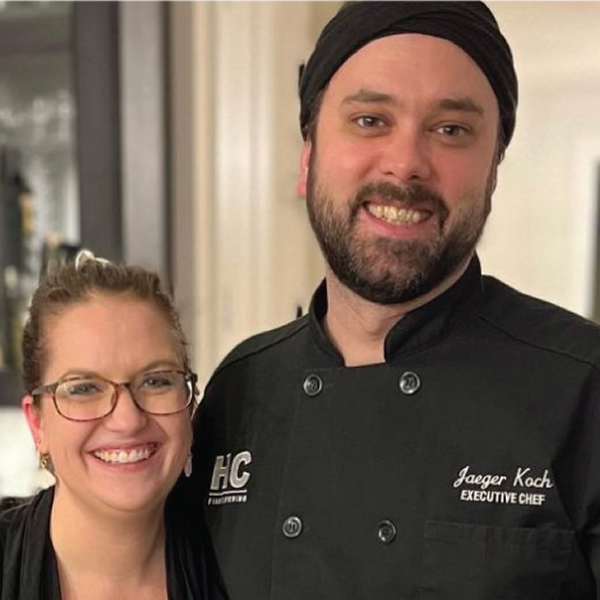 Jaeger and Sara Koch are both small business owners here in Kelowna. Jaeger has loved cooking from a young age and after cooking in many restaurants, wanted to showcase his own style of cooking through Hunter Cook Fine Catering, starting in 2018. He specializes in catering for 6-80 people and brings the feast to your location – from charcuterie boards to appetizers as seen here, to full three-course meals. They have also expanded to Make Your Pizza boxes, Cook Your Own Three Course Meal, and Take Home Charcuterie Boxes. Sara keeps super busy running all the aspects of the business that isn’t food related as well as has her own bookkeeping company.

We were able to enjoy a wonderful feast over Christmas and everyone loved it! We love to support our customers and will be enjoying a feast from Hunter Cook Fine Catering again soon!

Jaeger and Sara have each been collecting sports cards since they were kids – they’ve both watched hockey since before they can remember! They have been coming to Players Choice Sports for over 12 years together. We love how each of them “sneak” in to the store to pick up a box or hockey cards, sometimes as a gift for the other, or sometimes for themselves. Once it was even on the same day and we just didn’t say anything. Jaeger loves Upper Deck Series One – for the Young Guns while Sara prefers UD Artifacts. Santa brought them each a box of their favourite UD Team Canada this year and they’ve been stopping at Tim Hortons for more!

“Ever since I made my very first acquisition on the carpet of my Kindergarten classroom, an unsleeved 90-91 Pro-Set Lyle Odelein Rookie Card – which I still have by the way, I was set on a track that there would be no escaping from. I was made a collector, and that was that.
Since then, the hobby has been a way to connect with my Father, realize my Heroes, whose influence spans over a century, and gain countless joyful, exciting and fun experiences.”

Here are a few pieces I’m excited to share from my own personal collection. From players who I never had the privilege of cheering on in a live game, whose legends I’ve only learned of from other fans, in books and watching old footage. To the memory of the ’93 record-setting Stanley Cup finals when I was eight years old – this card’s value is not much in monetary terms, but commemorates the win, and holds tremendous personal value to me. Up in to present-day stars and young prospects who carry the torch (leave it to a Habs fan to make a torch reference) through our modern game.

“The method of acquisition of a card is an intangible, invaluable but quite intrinsic part of a personal collection. The connection to the card is intertwined with the experience of the trade, the purchase, the gift, and of course, the revelation of a freshly cracked box or pack. The fun of a ‘big pull’ is thrilling and sends most collectors into a child-like tizzy. And the history of vintage cards is awe-inspiring and it sparks our collective imagination.”

“I’ve been slowly building my collection for the past 15 years, ever since I started going to Kelowna Rockets games regularly. Going to Rockets games has been something my dad and I do together and always look forward to. My favorite cards in my collection are former Kelowna Rockets players, mainly ones who were my favorites to watch during their time on the Rockets like Tyson Barrie, Josh Gorges, Jamie Benn & Shea Weber. I love watching them live from when they join the team and following their careers in the NHL.”

Now collecting cards is something my husband and I do together and it’s been lots of fun for both of us to build our collections together! – Sara